In July, London-based journalist Flora Gill, who has bylines in GQ, The Sunday Times and other outlets, tweeted: 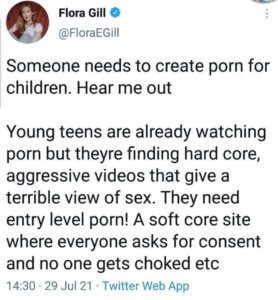 Absolutely not getting swept up into another twitter cesspool so deleted tweet before it picks up steam! Obviously not an actual solution, but it is a real problem. Everyone take a deep breath

What if we applied this same line of thinking to drug use? “Kids and teens are already doing hardcore drugs in high school so we should create reduced-potency cocaine for kids.” Obviously, this is nonsensical. No rational adult would agree this is a wise move, and yet that is exactly what Flora Gill and many other so-called “sex-positive” advocates are pushing for.

But some child educators also welcome porn-inspired content into their curriculum. In August 2021, a 7th grade teacher at Olathe Public Schools in Kansas posted to social media that she added two sexually graphic books, All Boys Aren’t Blue and Aristotle and Dante Discover the Secrets of the Universe, to her classroom library.

The idea that pornography is in any way helpful to the sexual, emotional, or mental development of a child is not only baseless, it’s dangerous.

In a recent report, United Nations International Children’s Emergency Fund (UNICEF) called online pornography “vital sexuality education” and noted that protection measures like content filters and age verification might infringe on their human rights. After public outcry, the report was briefly removed, carefully edited, and republished. They’ve yet to make a statement regarding the controversial report.

*Names have been changed to protect the identities of submitters.