Our Date with a Sex Buyer

During the 2016 World Cup, sex buyers (aka “Johns”) scoured the internet looking for women they could purchase nearby. Many came across Anya’s ad and sent her a text.

Our outreach team created Anya as part of a sting operation in which we lure sex buyers. These men believe they are about to meet with a girl they can purchase sex from, but we use this opportunity to meet with them—and kindly educate them—on the tragic reality of prostitution, sex trafficking, and how these girls end up in this vulnerable place.

Once Anya’s ad went up, we received texts and calls almost daily.

Michael* is one young man in his early twenties who came across Anya’s ad – an American from California who came to Moscow for the World Cup. He was exactly the type of guy we had prepared for.

The outreach felt like such a powerful, divine appointment, and one of the most beautiful ‘success stories’ of our trip! The ultimate prevention intervention.

Our Vice President of Impact, Helen Taylor, was the real “Anya” behind the scenes. She had created Anya’s ad and was texting back and forth with him. While Michael went to the hotel looking for Anya, two guys on our outreach team approached Michael in the lobby and began to chat. He seemed quite nervous but really open to them.

After the guys had been chatting with him for about ten minutes, one explained “Listen, you’re not going to be meeting with Anya tonight, as we actually set it up, and here’s why.”

They went on to talk with him for over an hour about his true identity and worth, as well as the reality of exploitation in prostitution. It was an extremely powerful experience. He told them it was his second attempt to purchase sex since being there and he said the first time he got so nervous he chickened out. So this would have been his first time, but thankfully, the exploitation was stopped.

Michael was in a very low and lonely place in his life and opened up to the guys in a big way. He said he felt extremely guilty about what he was about to do, but deeply aware that God had majorly intervened in his life.

Helen describes what happened next:

“The following day Michael met with one of the guys to watch a soccer match, and then joined our team for dinner. We welcomed him and I did not tell him I was actually ‘Anya.’ He seemed so happy to make some more friends and his heart was so open. I was so proud of the team! The outreach felt like such a powerful, divine appointment, and one of the most beautiful ‘success stories’ of our trip! The ultimate prevention intervention.”

After the success of the first outreach with a sex buyer, we decided to arrange another one.

Helen shares how it unfolded:

“A man happened to text me on the ‘John’s phone’ two hours before a pre-planned outreach so I conveniently arranged to meet with him. We conducted it at a hotel where three other meet-ups with exploited girls were happening at the same time.

Once again, our guys approached the John, chatted for a few minutes and then explained what was really happening. One of our team members went on to share about the devastating impact of his father being a sex addict—how it can tear lives and families apart—and described the impact it has on the girl who does not truly wish to be exploited. The John became very serious and agreed that it was destructive behavior. Slowly he said, ‘Wow, this meeting has been a wake up call.’ He left after that, clearly shaken up with a lot to think about.”

As we often say, sex trafficking would end today if men stopped purchasing sex. A critical part of abolition is to reach the hearts of men to turn the tide on this injustice. But it’s not just a lofty goal—it’s more within reach than we may think. It starts with one, and then it grows…

We’ve had the privilege of partnering with our friends at Epik Project to train male volunteers in sex buyer intervention around the world. This means that teams of men are regularly intercepting calls from prospective sex buyers and helping to educate them on the rampant trafficking and exploitation happening in the sex industry. We’ve seen some incredible transformations and eye-opening moments with men, like Michael, that we’ve reached out to.

We also have outreach teams that regularly meet with women and girls in prostitution, because we wholeheartedly believe that, no matter how a person ends up in the sex industry, they deserve a chance to be free.

You can help outreach teams bring freedom to individuals being sold for sex by donating.

Learn the truth of trafficking and prostitution in our animated video series available on YouTube. 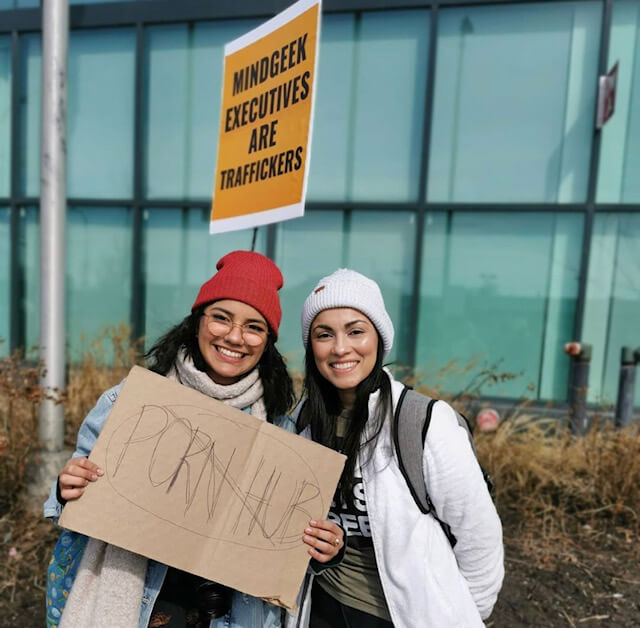