“I met my first boyfriend when I was 15… He introduced me to sex trafficking. I was getting in and out of cars with people I didn’t know. It was definitely nerve wracking. I had never even walked in heels before.”1

This is the face of sex trafficking in Atlanta: teenage girls, like Alexa, who are forced into prostitution by much older “boyfriend” pimps.

The city has become a hub for the sale of children. “Atlanta’s Jackson-Hartsfield International Airport is the busiest in the world. Experts say the flight routes make it a hot spot for the sexual exploitation of children. ‘Clients’ fly in and sometimes never leave the airport. They pay a waiting pimp, sexually assault a child in a public bathroom stall or another secluded area, and then board an outbound flight.”2

The Atlanta, Georgia metro, our City in Focus this month, has the ninth largest population in the U.S. “It is considered to be a top business city… that contains the world headquarters of corporations such as Coca-Cola, Home Depot, UPS, Delta Air Lines and Turner Broadcasting.”3

Atlanta stands among the most powerful cities in the US today and it also has a rich history as a major center of activism during the civil rights movement.

“In March of 1960, students of the six colleges comprising the Atlanta University Center, having decided to challenge the scourge of segregation in public and private facilities of Atlanta, presented a manifesto entitled ‘An Appeal for Human Rights’ as a preamble to pending demonstrations designed to achieve the same rights and privileges for ‘Negroes’ that were accorded white citizens…Today it is taught throughout the world as a profound statement of the determination of young people to overthrow the vestiges of slavery and to achieve liberty and justice for all.”4

Atlanta’s history of fighting for the rights of the oppressed is admirable, but Atlanta is losing the fight against the human rights travesty of sex trafficking. According to an article by CNN in 2017, “Atlanta’s illegal sex industry brings in nearly 290 million a year.”5 Deborah Richardson, the Director of the Human Trafficking Institute in Atlanta said, “Atlanta has been on the FBI’s top 10 list for human trafficking activity now for 15 years.”6

It is time to appeal for the human rights of the trafficked and exploited in Atlanta. And our appeal must be one of both prayer and action because events like Super Bowl 53, which will be played in Atlanta on February 3, only drive up demand and escalate sex trafficking in the city.

Each year we send an outreach team to the city where the Super Bowl is being played, and we see incredible breakthroughs every time. This year Out of Darkness, Atlanta Dream Center, Exodus Cry and other churches and ministries are joining together for the week leading up to the Super Bowl for SafeZone Atlanta.

Together we will be reaching out to sexually exploited women and girls across Atlanta daily on the streets, in strip clubs, and online. There will also be online/phone outreach to male sex buyers. Throughout the week we will be working with service providers and law enforcement so that those who want help can get it. And we’ll be participating in a 24/7 prayer room, contending for revival and the breaking in of light to Atlanta.

Pray with us for the transformation of hearts during the Super Bowl, for the success of SafeZone Atlanta, and for the long term eradication of sex trafficking in the city. Pray:

We invite you to join us for training and outreach in Atlanta! Click below to sign up for the training. 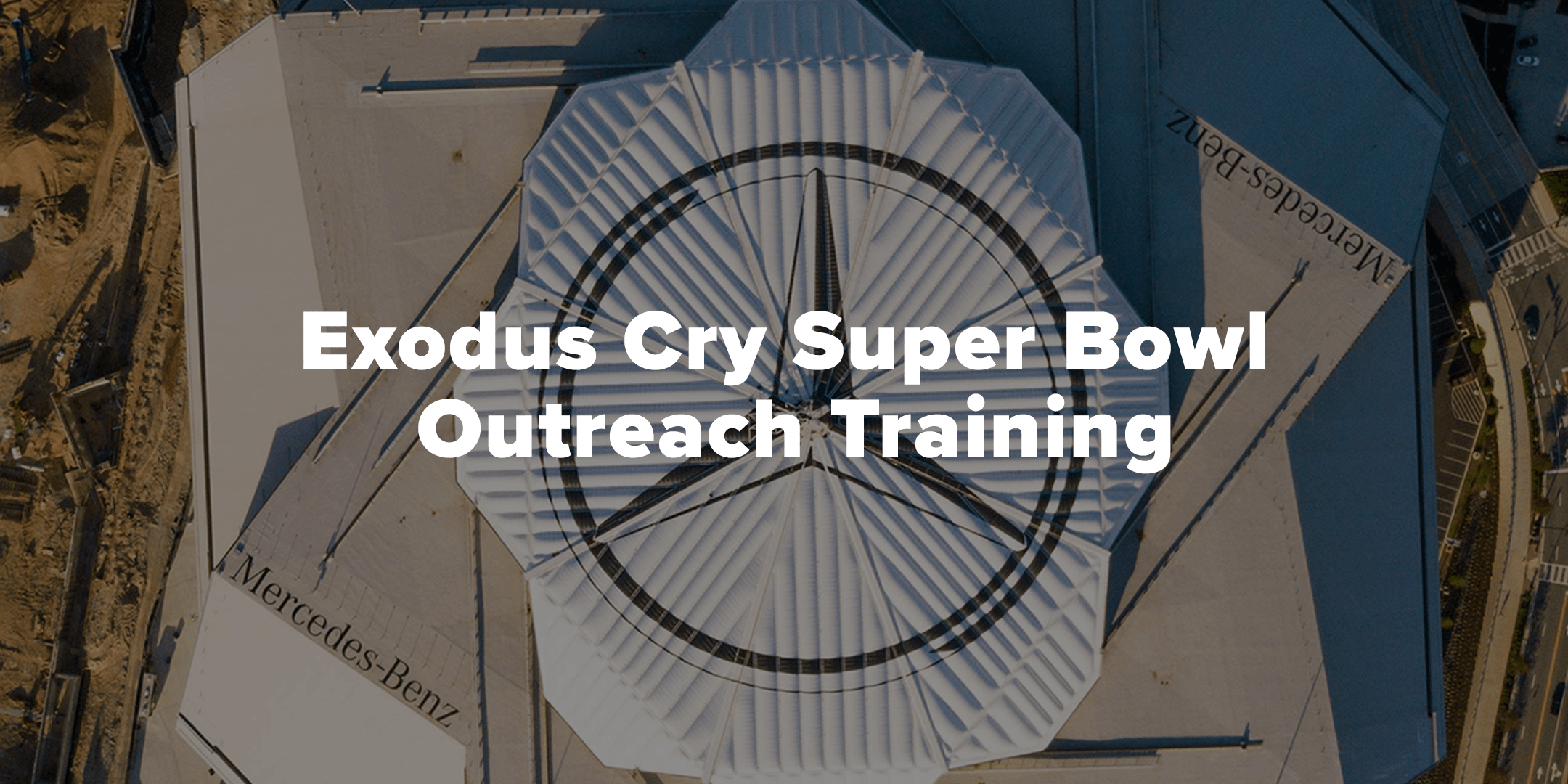 Get more details about the schedule, accommodations, and prayer room by emailing us at info@exoduscry.com