What started the Balenciaga controversy?

Needless to say, the campaigns were not well received and Balenciaga came under fire, not from the celebrities and influencers connected to the brand, but by child advocates and the general public, aptly calling for the ads to be removed, and for answers as to how they were ever approved in the first place.

Exodus Cry joined with many others in calling out Balenciaga for their disturbing campaigns sexualizing children.

Upon further examination of the photos in the two campaigns, viewers discovered further concerning elements. One of the books being used as a prop in the background was written by controversial artist, Michael Borremans, whose works include images featuring castrated toddlers. 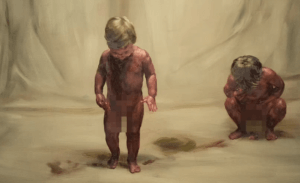 We can’t say whether or not the inclusion of this artist’s book was a coincidence, but looking at all the details, their set designs appear to favor an intentional push towards the glorification of child sexualization. Judging from a number of the artist’s other pictures and their similarity to recent celebrity designs Balenciaga has put out, it would seem as though Demna, Balenciaga’s creative director, has been influenced by Borremans’ work.

The reality is, it’s not a simple “whoops” when a million dollar campaign features kids holding their sexualized child toys – these projects are intentional at every step and the fashion brand’s creative director is well known for his controversial styling choices. The ads should have never been approved and it’s important the company, and those in positions of power within it, are held accountable.

The day after the campaign blew up on social media, Balenciaga issued a statement on their Instagram account, which by this point had been completely wiped of all images, apologizing for including children in the campaign: “Our plush bear bags should not have been featured with children in this campaign. We have immediately removed the campaign from all platforms.”

Issuing a second statement just hours after the first one, the brand apologized for the “unsettling documents” in their Spring 2023 campaign and announced they were “taking legal action against the parties responsible for creating the set.”

In the $25 million dollar lawsuit issued the next day, Balenciaga accused the styling company and set designer from the Spring 2023 campaign of being “malevolent or, at the very least, extraordinarily reckless.”

A spokesperson for the company being sued, told the Washington Post that “Everyone from Balenciaga was on the shoot and was present on every shot.”

Balenciaga ended up removing BOTH ad campaigns from their website and Instagram, and just a few days after the lawsuit was announced, the fashion brand rescinded the legal action without comment.

In the days following the campaign, many were calling on celebrities who partner with the brand to speak out. While most remained entirely silent, Kim Kardashian, who has modeled for and partnered with Balenciaga for some years now, eventually released a social media statement. She said she was “disgusted and outraged” by the recent campaigns and was “re-evaluating” her relationship with the brand. 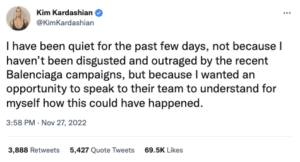 Another deeply disturbing revelation came out of the research around the Balenciaga scandal. The CEO of Balenciaga’s parent company Kering, François-Henri Pinault, is also on the board of Christie’s, a famous auction house that sold horrific “art pieces,” depicting naked children with genitalia on their faces. 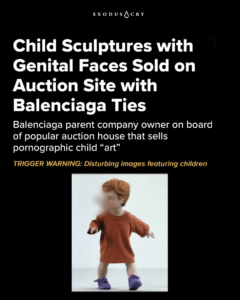 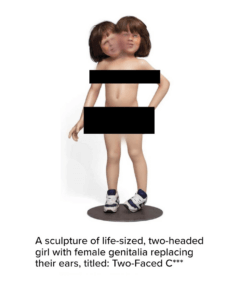 The pieces were the work of Jake and Dinos Chapman, and whether or not Pinault was aware of these abusive sculptures is unknown. But what’s clear is that we’re seeing a culture emerge that tacitly celebrates child sexual abuse, notably from the upper eschelons of society.

Following further public outrage and a non-stop social media riot against the brand, Balenciaga posted a fresh and more detailed statement to their IG: 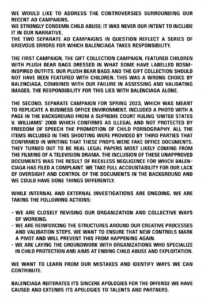 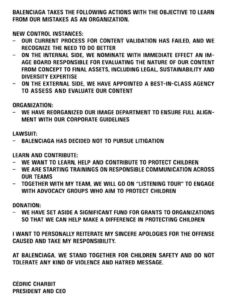 The fashion house took a stance against child sexual abuse and highlighted a number of ways, though vague, in which they would strive to do better.

While there are still major questions left unanswered, and further investigation to be done, one thing is clear, Balenciaga was sent a firm message: it’s NEVER OKAY to sexualize children. We hope this entire saga will serve as a lesson to many other companies, whether large or small, who are tempted to introduce similar disturbing themes into their products or advertising.

Child sexual exploitation is unfortunately rampant in our society and we’re grateful the Balenciaga ad campaign hit a nerve because it points to the larger pervasiveness of child sexualization and fetishization that we’re seeing more broadly in our culture.

When we accept the overt sexualization of children as merely “provocative art” or “cutting edge fashion,” we have accepted the normalization of child sexual abuse—one of the most devastating things to take place in a young person’s life.

We must collectively say no to the normalization of child sexual abuse, anywhere we see it.

Unfortunately, the sexualization of children in our culture spreads far beyond this inappropriate campaign.

Here are some alarming stats:

Balenciaga is the tip of the iceberg when it comes to the normalization of child sexual abuse in today’s world and while we are grateful to everyone who sounded the alarm about the campaign, we hope this will shine a spotlight on the larger issues at hand.

Exodus Cry has been calling for laws that would help to bring significant changes to the prevalence of the sexualization of children and we’re just getting started.

Two ways you can add your voice to this important fight:

DONATE today to help implement these laws, create films that expose this injustice, and protect millions of children. 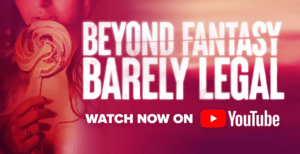 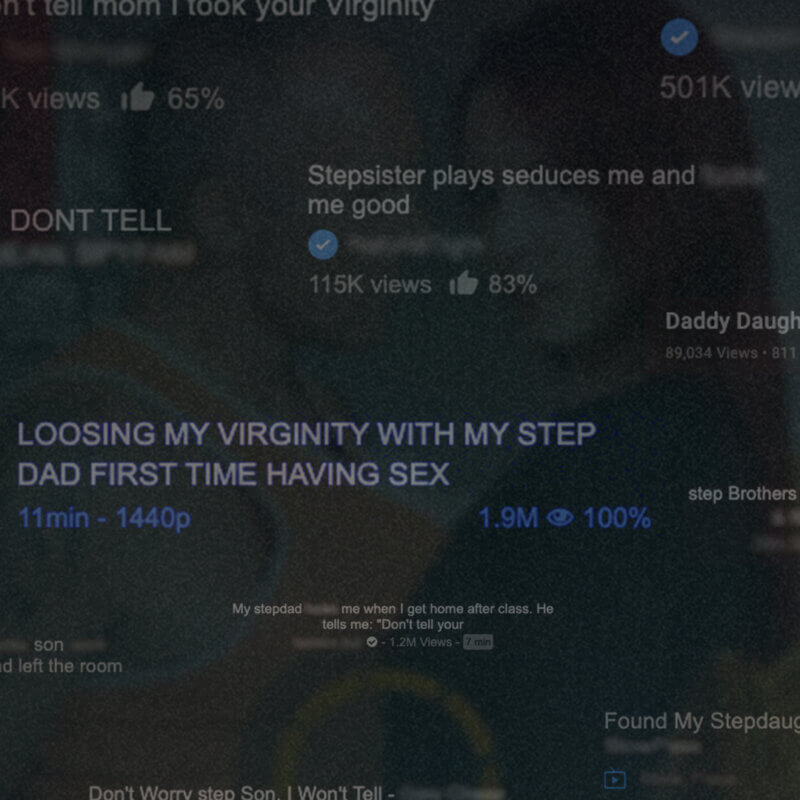