For anyone who cares about the global fight against sex trafficking, and any form of sexual abuse, this is a BIG DEAL, a true moment to pause and celebrate. For every predator who seeks to profit from the sale of women and children’s most traumatic experiences, this is a moment to fear.

There is something about these one million signers that is especially potent. These aren’t signers from just a niche group in a specific geographic region. These signers are GLOBAL and DIVERSE. This petition has been signed by people from at least 192 countries. There are only 195 countries in the world.

This petition has been signed by people from at least 192 countries. There are only 195 countries in the world.

The thing that’s so significant about the diversity represented in this movement is it proves this campaign has universal appeal. Because, predators aside, virtually everyone can agree that no company should be able to profit off videos of women and children being raped and trafficked.

The journey to one million signatures has taught us something else. This isn’t about getting signatures just for the sake of getting signatures. As the number of signers has grown, so has media exposure. To date, over 250 articles have been written about this campaign in 35 countries. Over the last few months, despite the news cycle being consumed with stories surrounding COVID-19, this Traffickinghub campaign has continued to gain visibility. 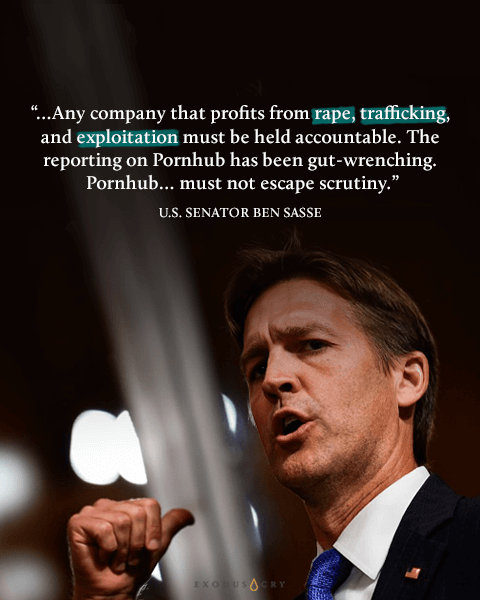 Now, with 300 child protection, anti-trafficking, and women’s rights organizations officially endorsing this fight, together we are stronger than ever.

The universality of this campaign proves that this is only the beginning of the impact we will make together. We now know that people everywhere care deeply that trafficking victims are being used to turn a profit by Big Porn—now we just need to keep reaching more people with this crucial message.

Here are two ways you can propel this fight forward:

How will your support make an impact? Here are three specific ways.

In just four months, we’ve come so far together! Let’s boldly stand against this mass exploitation and keep the pressure on until justice is served.