The forests in and around Moscow have become “outdoor brothels” where sex buyers flock to each night. With prostitution being illegal in Russia, these locations provide a veil of separation from the more visible city environment.

As we shared in a previous post, men will often drive up in their cars to a parked van in a remote forest location. This van will be filled with women, many of whom are foreigners, who file out of it and line up for the sex buyer to examine upon their arrival. Each buyer will choose a woman and leave with her in his car. Sometimes multiple men together will purchase one girl and drive off with her for the night…

In one particular forest location, we’ve been sending teams to do worship and prayer during the day, and to show love to exploited women there.

It’s a pimp-controlled environment and in this particular location the pimp is “a very intense and strong woman with dark eyes,” as our Director of Outreach, Helen Taylor, shared with us.

Recently our team prayed over the very spot where the girls line up and the place where the girls wait in the van. A dad on our team stood on that spot and spoke a very moving father’s blessing while holding his baby daughter in his arms.

We’ve just received word of an incredible breakthrough in that forest location!

A few days after that prayer time, the biggest raid went down that’s ever happened there and the main pimp was not only arrested but put in PRISON! One of the Russians on the outreach team may soon be visiting her in prison to minister to her there.

A few days after that prayer time, the biggest raid went down that’s ever happened there and the main pimp was not only arrested but put in PRISON!

Our team, including Helen, went back to the forest to worship there the following week and found that the van had its tires punctured and the electrical system pulled out. They climbed inside it and anointed all of the seats with perfume.

Helen describes what happened there:

“We wrote Bible verses on the windows and I tore down a sticker of the Devil coming out of a whirlwind on the front dashboard! I also found a single stiletto heel and placed it on top of the sticker of the Devil. Left in the van were a pair of red shoes, which I felt ok to take, as a symbol of the freedom that came from that raid. Jesus even gave me shoes!! I’m bringing all this back.” 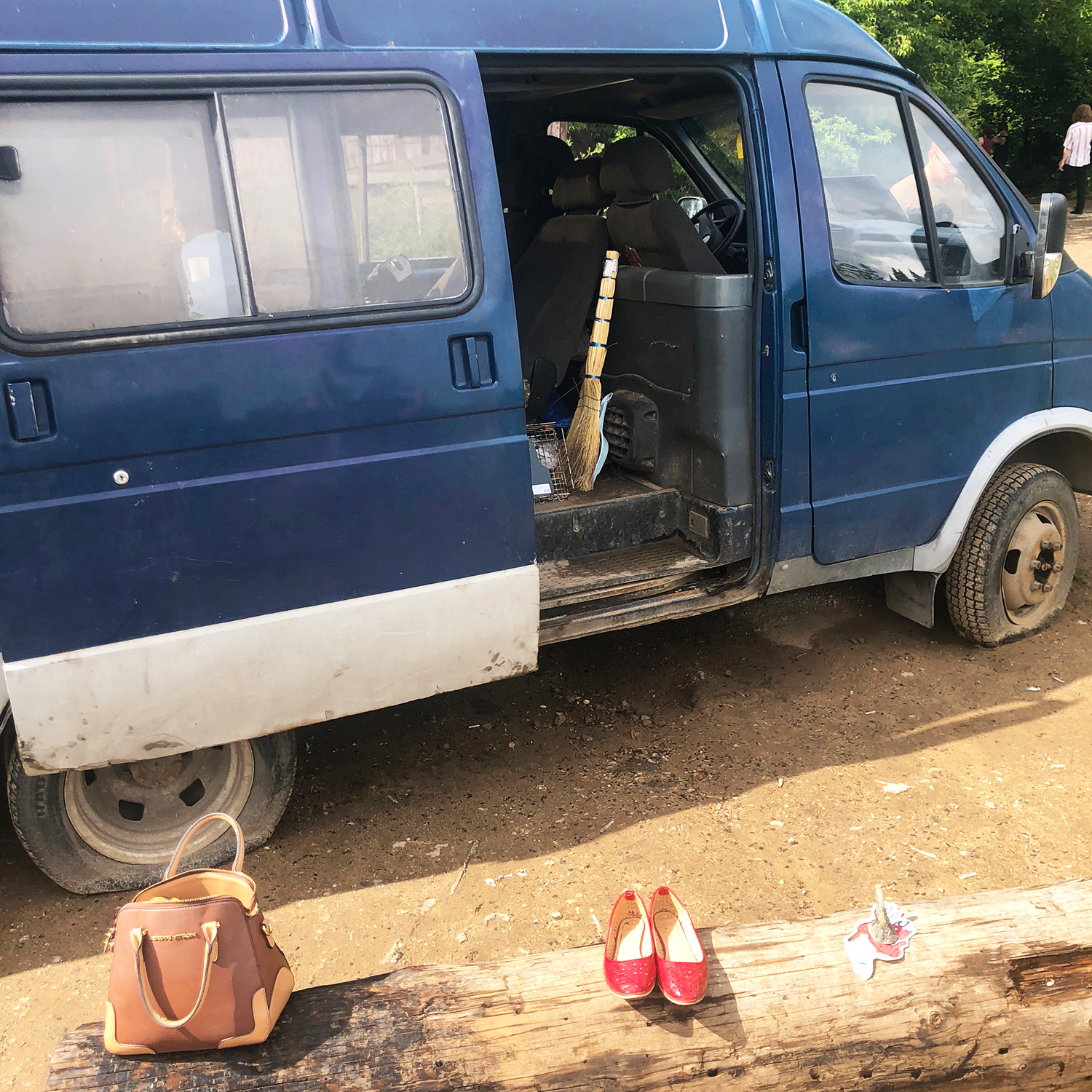 The van where women were prostituted out of in a Moscow forest.
As you may know from Helen’s past stories, she collects the shoes of those formerly prostituted, paints beautiful pictures of them, and displays them wherever she travels to help tell the stories of these beautiful women. That’s why finding a pair of shoes left in the van is wonderfully significant.

Helen continued to share on the outcome of this raid:

“After a few days, some of the girls were sadly back on the streets, but there are definitely less girls there and with one of the main pimps being in prison now, we feel a shift has happened. One girl texted a Russian volunteer yesterday saying, “I have left Moscow and am back at home. Your prayers have been heard and I am no longer in this industry.” She literally said that!! And something else amazing… she was the second of the three girls I felt to give the Father’s Love Letter [booklet] to three months ago!! How many more have come out that we don’t even know about?!”

“I have left Moscow and am back at home. Your prayers have been heard and I am no longer in this industry.”

The Lord has truly met our outreach teams in Moscow, heard the prayers of all those crying out, and is bringing freedom to his daughters there.

The LuBlue campaign during the 2018 World Cup has officially ended, but there’s now a fresh wave of Russian abolitionists who’ve been trained to reach the sexually exploited in their communities. The work of outreach, healing, and love in Moscow has only just begun!

We have more exciting Moscow stories to share so stay tuned for future posts!