**TRIGGER WARNING: This post references tweets that contain written material which may be triggering to some readers.**

As the saying goes, “where there’s smoke, there’s fire,” and Pornhub—well, they’re burning up.

The company has consistently denied any fault, even going so far this week as to call the entire idea of illegal videos on their site “conspiracy theories.” They have repeatedly attempted to dismiss the consistent stream of criminal behavior as being random outliers in their virtual encyclopedia of sex content.1 In fact, their favorite thing to do in response to allegations is to release canned statements from fake executives, denying fault and attacking their accusers.

But while their PR team, disguised as executives, issue unapologetic denials, comments made by some of their real employees and spokespeople tell a different story. Earlier this year, Laila Mickelwait tweeted out screenshots of Reddit comments from Pornhub’s Sr. Community Manager, loathing age verification systems, and whining about how protecting children would hurt Pornhub’s business.2 Her words exposed Pornhub’s corporate value system, which doesn’t care about protecting minors as they say, but about getting as much traffic as possible, regardless of who they harm. 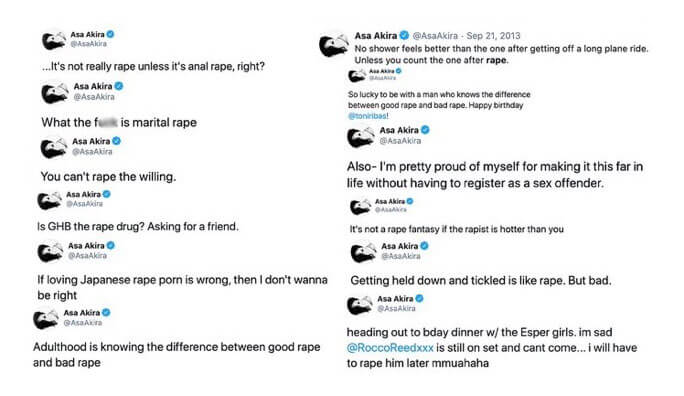 Other tweets of hers refer to predatory behavior and sexual assault such as, “Is GHB the rape drug? Asking for a friend,” and stating plainly that she is proud of herself for being able to avoid having to register as a sex offender. If that wasn’t sickening enough, Asa has also been vocal about all types of inappropriate and illegal behavior, complaining about the illegality of incest and saying “incest should be legal,” making “jokes” about “coat hanger” abortions, spouting horrific anti-semitic and anti-LGBT comments, and more.

Imagine for a moment if a high profile celebrity, politician, or athlete blatantly celebrated pedophilia or rape on social media. Talk about “cancel culture.” Not only would you see public backlash and an apology, but that person’s career would be over. Contracts would be terminated, endorsement deals forfeited, resignations, legal investigations, you name it.

There wasn’t any, of course.

An ambassador’s job is to promote and lobby for the values, interests, and agendas of the country or company they represent. Given what we’ve learned about Pornhub’s culture, Asa is a perfect fit for them. They won’t punish her because apparently they are very comfortable with her promoting and trivializing sex crimes.

Not surprisingly, the same executives who don’t hold themselves accountable for the consistent human rights violations and criminal activity on their site aren’t going to hold their employees accountable either. It has become our collective responsibility to hold them accountable for proliferating a rape and abuse culture, and for trying to validate it as normal.