Here is the definition of irony:

The size of the audience who knows your story: zero.

Your body is on display for mass consumption, but your voice is locked away.

One of the most significant challenges to getting a survivor story heard by society is the great cost survivors must pay when they go public with their stories. They face severe verbal attacks, threats, are accused of lying, their livelihood is damaged, and sometimes worse. We know one survivor whose treasured pet was intentionally killed by those who wanted to silence her. The fact that those who’ve already suffered unthinkable levels of abuse must then suffer the scourge of compassionless, hate-filled members of society is a tragic indictment against our world.

Still, there are courageous survivors who gather the strength to come forth, and it’s critical that we take the time to hear what they have to say, bearing in mind the great personal risk they are taking in sharing their story.

Just days ago, a user who goes by the name “butterflies and rare” published a chilling account of multiple abuses they suffered. They write:

“…I was sixteen. I’d snuck out for a night of (irresponsible) drinking. I thought it would be fun. I don’t recall much of how it happened—I don’t know if maybe I’d drunk too much or if someone had slipped me something. But I know exactly what happened. Because I watched it. I woke up the next morning and found a video of my sexual assault in my camera roll. I know I hadn’t started filming—my hands were nowhere near my phone throughout the whole thing. One of them had forcefully tied my hands behind my back, so I can’t have done [it]. I also found the Dropbox app on there—signed out, of course; except I didn’t have a Dropbox account.

What happened was already enough to hurt. But I could never have envisioned what happened next. The videos got uploaded to the internet. To more sites than I care to think about. Except, one sticks out like a sore thumb—TraffickingHub.

I contacted their support. And they removed the first video, for which I am grateful. But removing the second video was an absolute whirlwind.

A sixteen year old was raped. Their hands were tied behind their back and their mouth gagged while tears flooded from their eyes. #TraffickingHub gave a home for the video where the comments encouraged it.

I was that sixteen year old.

I reached out to them independently initially. I explained what had happened and that I wanted it removed, I didn’t consent and I was underage. They blatantly refused to do such a thing. They weren’t sure if my abuse and torture was illegitimate. Someone in an office sat in front of a computer screen [and] got to choose whether my pain and suffering was valid enough for them. And that stung like absolute hell. Someone who wasn’t there got to determine whether I was abused or not. And they decided there was nothing wrong with it. I don’t know why the tears in my eyes and the cries of ‘no’ before I was gagged wasn’t enough. I don’t know why saying ‘I was raped’ wasn’t enough for them. But apparently it wasn’t.

They also prolonged my torture with the rampant, unmoderated comments. I had to change my social media usernames after someone in the comments shared my accounts and my mobile number. Their inability to moderate comments or at bare minimum filter identifying information gave my abuser the direct chance to call me. Picking up my iPhone, swiping to answer the ‘No Caller ID’ and hearing his voice was one of the most painful experiences of my life. Every fear and emotion I’d had was right there in my ear.”*

“Butterflies and rare” concludes by saying:

“I would like to thank Laila Mickelwait and the many activists that spread information on #TraffickingHub. Please, please research the truth behind this company and the legitimacy of the pornographic content you consume.”

We honor this survivor’s brave voice!

About two weeks ago, “Sofia” also went public with her story of abuse as a child.

“‘I am a survivor of child trafficking’ [is] a sentence I’ve put off saying for a very long time. I didn’t consider myself a victim because I didn’t know anything different. As a 9-year-old, I thought I was just helping mommy and daddy. As a child, I had always been taught to not question my parents, to be seen and not heard, that as a girl I was nothing more than a inconvenience, that I needed to help my parents pay the bills because that’s the least I could do.

I used to spend hours reading the comments, people asking how much a night with me would cost. 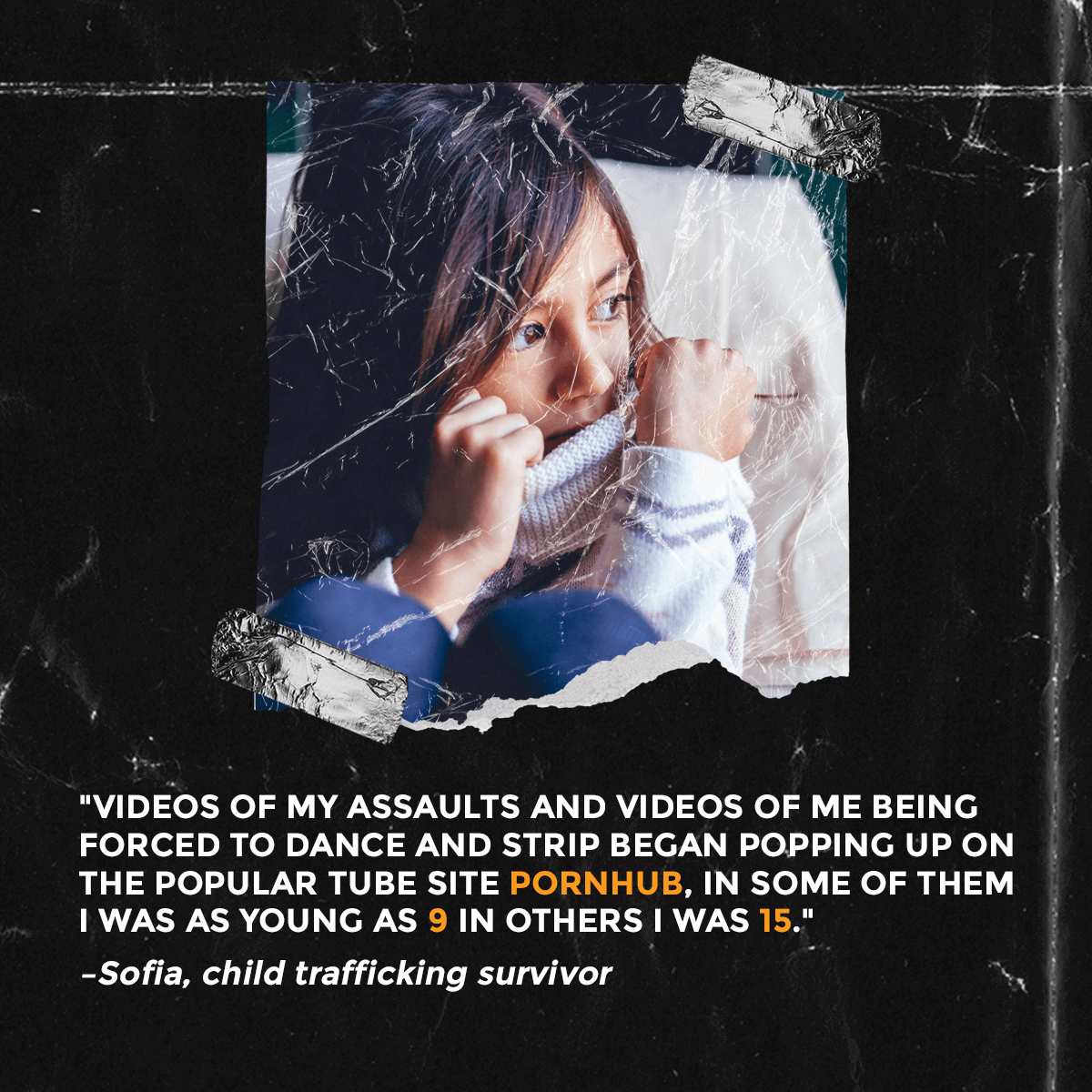 I’m telling my story because I don’t want anyone to go through and feel the way I did. I thought if I spoke up everyone would think I was a liar—I don’t care anymore. To anyone that’s gone through something similar: I’m with you, I see you, and I believe you. It is not our fault and those who monetized and downloaded our trauma need to be held accountable.